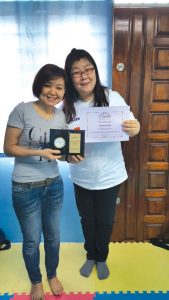 The Kindermusik Maestro has a mission: helping children become better learners and helping parents understand how to help them reach their highest potential,” said Michael Dougherty, CEO at Kindermusik International.

Kindermusik with Agape joins the elite company of the 300 Maestros identified as the top Educators of the over 5000 licensed educators in the world who teach Kindermusik’s music and movement curricula. Clarice was trained locally and abroad in Singapore as an early childhood educator and joined Kindermusik in 2005. Today Clarice and her teaching team teach the learning programme to over 200 families a year.

Three years ago, they have expanded from one Kindermusik studio to two.

“Seeing children growing in many aspects is my joy of teaching. You can never bring music into a child’s life too early. Children grow and learn so quickly before the age of five. Kindermusik provides an environment for cognitive and social growth, and a lot of fun! Every child loves music and movement, and that is just what we give them!” said Clarice

Kindermusik International is the world’s leading publisher of music and movement curricula for parents and their children, newborn to seven years old. More than 5000 licensed educators use the Kindermusik curricula in more than 63 countries, reaching more than one million families. The award-winning books, CDs, games, and instruments are based on more than 30 years of experience creating curricula based on new and proven research in child development, designed to nurture skills in the whole child: cognitive, physical, social, emotional, language and musical.

Another Accolade for the Greenest Building in Perak