A group of 25 NGOs in Perak under a coalition known as the Gabungan NGO Prihatin Perak organised an NGO Carnival themed “We Care” on Sunday, January 27 in conjunction with the 37th edition of the Ipoh Car Free Day. The programme held in collaboration with Ipoh City Council was graced by Menteri Besar Dato’ Seri Ahmad Faizal Azumu.

A total of 30 booths by members of the coalition and several government agencies including Ipoh City Council, Perak Water Board, General Hospital, National Anti-Narcotics Agency and Perak Crime Prevention and Community Policing were set up to showcase the services offered by the NGOs. Over 5,000 people attended the event, which was held every 4th Sunday of the month to help promote Ipoh as a low carbon city.

According to NGO coalition chairman, Professor Dr Richard Ng, the carnival was mooted to provide information to the public about the various social services available. It was in line with their slogan “We Care” to make the public aware that there are NGOs in Perak who are helmed by people with various expertise and are passionate in serving society. He hoped that the carnival can also help to get the youths especially school students to take part as volunteers to help provide various services to the society mentored by the NGOs.

Among the services being showcased by the NGOs were health care for the elderly and disabled people, education services for the minority group, environmental and recycling awareness, skills display by the homeless, information on dementia and religious studies.

In his opening speech, Ahmad Faizal congratulated the NGO coalition adviser, Datin Normah Hanum and chairman, Dr Richard for their success in bringing over 30 NGOs and government agencies to come together to showcase their services. He stressed that NGOs play an important role as the third force in helping society with various social problems. He also congratulated KOHIJAU for being awarded the JCIM SDA2018 “Best of the Best” and “Best in Climate Change” award which made Perak proud as the best NGO in Malaysia for its Sustainable Development Goal efforts. 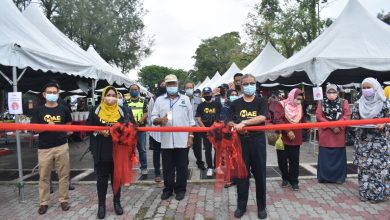 Lowpro5 the Champion of Angsana Best of Busker