Due to the escalating cost of food and general grumbling by average wage earners, Ipoh Echo decided to tighten our belts and went on a survey to see how frugal we can be to keep ourselves fed. Initially, a sum of RM10 was proposed to cover the cost of food for one day but it was raised to RM15, which was felt to be a more realistic figure.

After a couple of days of “splurging” our findings are as follows:

The Temptation to Overeat and Overspend is Enticing

Ipoh is already known as a Food Haven and we are never short of places to eat. There are food courts and warong in every nook and corner of town and we have featured some of the more prominent ones here to help stretch your ringgit further.

For the normal Ah Pek and Ah Soh breakfast, a cup of “kopi-o” (RM1.60), 2 half-boiled eggs (RM1 each) and 2 kaya toasts (RM1 each) will come to RM5.60. Other choices are: plain chee cheong fun RM3.50, plain noodles (kon low mein) RM2, plain curry noodles RM2.50 with liew (fritters) additional RM1 per piece or nyonya kueh, yeow chow kwai, etc., dai kao mein all at RM1 per piece. Down that with a combination of any of the above with a cup of “kopi-o” (RM1.60) or hot Chinese tea at 60 sen per glass and you may stay within the RM5 range for breakfast. Choices and preferences of food are wide and varied.

The most popular non-halal food for lunch and dinner is chap fun or economy rice. A normal serving of 2 vegs and a meat with rice is RM4 and a plate of chicken/char siew rice with some cucumber can also be had at the same price. Of course, you can also choose from a wide variety of noodles available from RM5 to RM8. Have a glass of Chinese tea or plain water to end your meal and you should be within your budget which is not only good for your pocket but your health as well!

Generally, halal food is more expensive due to the condiments, ingredients and meats used in the cooking. A plate of rice with chicken and vegetables may set you back by RM6 or more. As such, some of the breakfast dishes like roti canai, chapati, nasi lemak, etc. can also be eaten as a meal by itself together with some side-orders of vegetables/meats at RM3-RM5 per serving.

For the budget conscious, there are some stalls at Medan Selera Stadium offering lunch at RM3 per set only, consisting of rice and chicken curry.

Starting from our home-base Ipoh Garden, we have the Family Food Court which used to be the Woolley Centre, offering all types of mouth-watering Ipoh fare. Under the new management the centre is now open from 8am to 10pm daily, running on two shifts (each shift having its own proprietors), meaning we now have more choices of different types of food to choose from, day and night!

Next to this is Restoran Kamwan Aneka Selera or more popularly known as Gourmet Square which is open from 6pm until 11pm. There are about 45 stalls here offering 45 different types of food. Favourite here is the curry mee followed by char kway teow, kai see hor fun, ikan bakar, loh bak and a long queue is always found at the Nasi Pandan and popiah stalls. This centre was recently featured in a HK foodie production as having one of the best food in Ipoh.

A stone’s throw away from these two eateries is the Bukit Merah Curry House, a mamak outlet which stays open for 24 hours. It offers a variety of reasonably good and affordable halal food viz roti canai, thosay, chapati, etc. as mentioned earlier.

Going further across to Ipoh Garden East, we have another mamak outlet offering all types of halal food. Nasi Kandar Nasmir, like most mamak outlets, is open 24 hours and the plus-point is that it is now air-conditioned. Surprisingly, even after its recent upgrade, their prices have remained unchanged as before. Together with their upgrade they have also included western cuisine viz Sizzling Chicken Chop, Fish n Chips and Spaghetti into their menu.

This street (pic below), Jalan Medan Ipoh in Ipoh Garden East, practically comes alive after 7pm until early morning. Anchored by its chief tenants Pusat Makanan Metro Ipoh and Kafe WK Garden East, the whole street is transformed into a food fest with the best of street food viz fried noodles, bak kut teh, fried chicken wings, satay, ikan bakar, wonton mee, laksa and many more. Situated right in the heart of the “watering holes” of Ipoh, this place serves as a food paradise for those “pubbers” who are out for a midnight snack after a good night out with friends.

Other places where you can get reasonable priced and tasty halal food is the warong next to Angsana Mall along Jalan Hospital. There are three stalls offering Malay and Thai (tom yam) food which are quite good and inexpensive. Open for lunch until late at night. One set back is that there’s no toilet facility after the mall closes at 10pm.

The road along Persiaran Greentown 2 (just opposite Dewan Bandaraya) is a haven for halal street food like its counterpart in Ipoh Garden East. Top of the list is their sup tulang and other Malay and Thai delicacies. Other night spots are at Merdeka Garden, renowned for its MG Mee Kari and satay and the warong opposite Bank Islam in Jalan Panglima Bukit Gantang Wahab, which we heard serves one of the best Nasi Goreng Udang in town.

For those who cannot do without rice every day, there are numerous shops selling chap fun all over the city besides the food courts. Places like Restaurant GT Ipoh along Jalan Sultan Abdul Jalil (behind the old Ruby Cinema), Ritz Bina in Bercham and Restaurant Yeong Wai (which, by the way, is also famous for its Roast Duck) in Taman Ipoh Jaya offer a wide variety of dishes at affordable prices.

Another gem in Ipoh is Tong Sui Kai (Desserts Street) off Jalan Sultan Idris Shah (in front of the old Odeon Cinema) which sparkles until the wee hours of the morning. Besides offering only cool, refreshing desserts like leng chee kang, ABC (shaved ice kacang), chap kor sweet (mixed fruits ice) and rojak as the street name suggests, foodies will also like the chee chap chok (pork/innards porridge), curry mee and the ever popular ngau lam fun (beef noodles). In the halal section, a Malay family sells burgers which is very popular, we were told.

Nestled atop a hill-lock off Jalan Sultan Iskandar, from where its name is derived, is Little Genting. With Restoran Impressive running from morning to late night and Café Hill View next door, which opens only in the evenings, this place is a hive of activity both day and night as it is strategically situated among some budget hotels in the area. Bak kut teh, clay-pot chicken rice, kai see hor fun, curry mee and fried noodles are some of its better offerings. 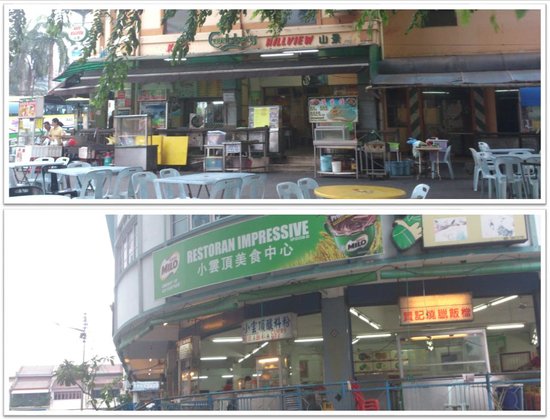 The above list is not exhaustive and there are still many more areas which we have not covered in this article. All the food courts mentioned in this article have at least one stall selling chap fun which will help greatly for those with a tight wallet. The prices quoted here are estimated average prices and may defer from shop to shop as well as on where their locations are. Based on our survey we believe that it is achievable to live on RM15 per day. However, with the options of so many foods to choose from the temptation to overeat and overspend is enticing. One therefore, must practise restrain, have good discipline and be frugal in these trying times.